A History of guru's....there are so many of them, but now you have a one-stop-shop!

Click on the guru's head shot for more information!

Marold Studesville, Owner and CEO of TFSMall and eTruckBook is THE all round agony aunt, self help and financial guru! 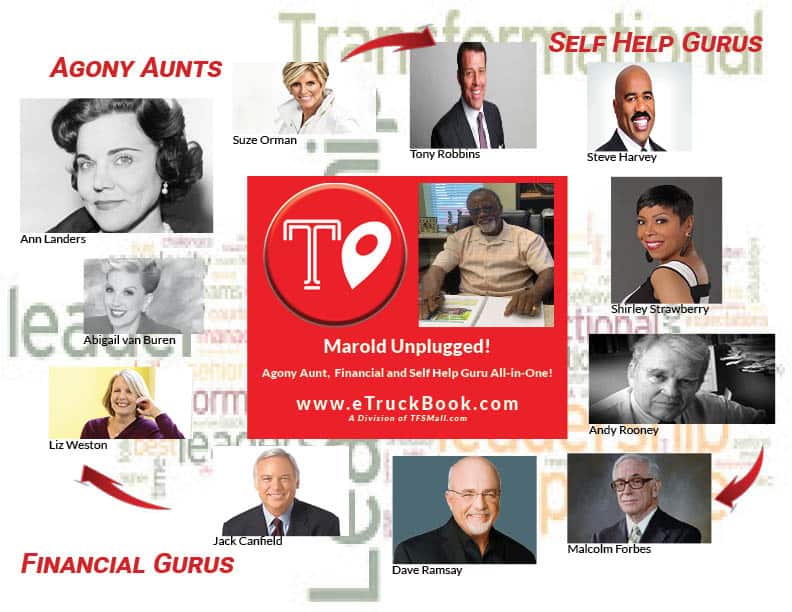 Ann Landers was a pen name created by Chicago Sun-Times advice columnist Ruth Crowley in 1943 and taken over by Esther Pauline "Eppie" Lederer in 1955. For 56 years, the Ask Ann Landers syndicated advice column was a regular feature in many newspapers across North America. Owing to this popularity, "Ann Landers", though fictional, became something of a national institution and cultural icon.

Dear Abby is an American advice column founded in 1956 by Pauline Phillips under the pen name "Abigail Van Buren" and carried on today by her daughter, Jeanne Phillips, who now owns the legal rights to the pen name.

Liz Weston is an award-winning personal finance columnist, speaker, commentator and author of several books about money. She writes for the personal finance site NerdWallet, and her question-and-answer column “Money Talk” appears in newspapers throughout the country, including the Los Angeles Times, the San Diego Union-Tribune, Palm Beach Post, the Portland Oregonian and others.

Jack Canfield is an American author, motivational speaker, corporate trainer, and entrepreneur. He is the co-author of the Chicken Soup for the Soul series, which has more than 250 titles and 500 million copies in print in over 40 languages.

Dave Ramsay is an American radio show host, author and businessman.  As a real estate investor, doing business as Ramsey Investments, Inc., he built a rental real estate portfolio worth more than $4 million by 1986. The bank that was financing his real estate was sold to a larger bank who demanded immediate repayment on the loans. He was unable to pay, and eventually filed bankruptcy in September 1988. After recovering financially, Ramsey began counseling couples at his local church. He attended workshops and seminars on consumer financial problems. Ramsey developed a set of lessons and materials based partially on his own experience and partially on works and teachings by Larry Burkett, Ron Blue and Art Williams of the A.L. Williams company, now Primerica. In 1992 he wrote his first book, Financial Peace.

Suzie Orman is an American author, financial advisor, motivational speaker, television host, and podcast host. In 1987, she founded the Suzie Orman Financial Group. The Suzie Orman Show began airing on CNBC in 2002, running for 13 years in the U.S. and internationally. Orman has written nine New York Times bestsellers about personal finance. She was named twice to the Time 100 list of influential people, has won two Emmy Awards, and eight Gracie Awards. Orman has written, co-produced and hosted 8 PBS specials, and has appeared on multiple additional television shows. She has been a guest on The Oprah Winfrey Show approximately 29 times and Larry King Live over 30 times. Orman is currently the podcast host of the "Suzie Orman Women & Money Podcast."

Malcolm Forbes was an American entrepreneur most prominently known as the publisher of Forbes magazine, founded by his father B. C. Forbes. He was known as an avid promoter of capitalism and free market trade, and for an extravagant lifestyle, spending on parties, travel, and his collection of homes, yachts, aircraft, art, motorcycles, and Fabergé eggs.

Tony Robbins is an American author, philanthropist, and life coach. Robbins is known for his infomercials, seminars, and self-help books including Unlimited Power and Awaken the Giant Within. In 2015 and 2016 Robbins was listed on the Worth Magazine Power 100 list.

Steve Harvey is an American comedian, television host, producer, radio personality, actor, and author. He hosts The Steve Harvey Morning Show, the Steve talk show, Family Feud, Celebrity Family Feud, Little Big Shots and its spinoff Little Big Shots: Forever Young, Steve Harvey's Funderdome, Showtime at the Apollo, and since 2015, the Miss Universe pageant.  Harvey is the author of Act Like a Lady, Think Like a Man, which was published in March 2009, and the book Straight Talk, No Chaser: How to Find and Keep a Man.

Andy Rooney was an American radio and television writer who was best known for his weekly broadcast "A Few Minutes with Andy Rooney” from 1978 to 2011. Rooney's "end-of-show" segment on 60 Minutes, began as a summer replacement for the debate segment "Point/Counterpoint”.  In the segment, Rooney typically offered satire on a trivial everyday issue, such as the cost of groceries, annoying relatives, or faulty Christmas presents. Rooney's appearances on "A Few Minutes with Andy Rooney" often included whimsical lists, e.g., types of milk, bottled water brands, car brands, sports mascots, etc. In later years, his segments became more political as well. Despite being best known for his television presence on 60 Minutes, Rooney always considered himself a writer who incidentally appeared on television.

As the owner of T.F.S. Mall and eTruckBook, Marold Studesville is a mine of business and self-help information. His column “Marold Unplugged” regularly gives business owners direct and pointed advice that allows them to take their business to the next stage. This pointed advice can be very personal and almost at the level of an agony aunt,  however his thoughts regularly cover self help, business and financial suggestions. “Marold Unplugged” is your one-stop-shop for advice at all levels for both personal and business.

Steve Harvey and Shirley started their morning show relationship in Los Angeles.  From 2000 to 2005, Shirley was the co-host of Harvey’s popular LA-based morning show and it was Harvey himself who dubbed her: “The Best Voice in Radio.”

Their program went on to become the #1 morning show in Los Angeles and one of the most talked about in LA radio for their tireless community efforts - from helping students get desperately needed books, to honoring women and teachers, as well as feeding and helping the underprivileged all over the city.