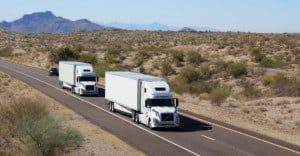 Peloton Technology has unveiled plans to develop Level 4 automated following technology that would allow one truck driver to safely operate two tractor-trailers in a platoon.

“We want to leverage the skill and experience of the lead driver,” Josh Switkes, founder and CEO of Peloton, told Fleet Owner in an interview. “That helps in a variety of ways make this type of automation dramatically simpler than a stand-alone driverless truck.”

Switkes spoke publicly of Peloton’s plans for first time on July 17 at the 2019 Automated Vehicle Symposium in Orlando, FL.

Currently, the company is rolling out its Level 1 PlatoonPro system, which has a driver in both the lead and follow trucks. The driver in the second truck steers, but the system controls the powertrain and brakes to manage the following distance.

PlatoonPro is being used by six fleet customers in real-world conditions, with numerous other customer trials underway. Switkes said the system has a perfect safety record, and customers are achieving fuel savings averaging more than 7%. In some cases, miles per day have exceeded 700 per truck, resulting in projected fuel savings of up to $7,000-10,000 per truck, per year.

Switkes declined to provide specific details on any of the fleets using PlatoonPro, but hinted much of the activity has taken place in Texas. He emphasized one takeaway thus far is how infrequently other vehicles cut into an established platoon, which critics have pointed to as a safety risk and a reason the suggested fuel economy benefits would not be as high in real-world conditions.

Addressing another frequently cited concern, Switkes noted it is rare for significant “hard braking” events to occur. However, the company has spent “a huge amount of time” understanding and measuring braking capabilities to ensure the system will work properly every time, regardless of the circumstances.

As Peloton works today to further deploy PlatoonPro, Switkes said there is no exact timetable for its Level 4 system, stressing that safety testing and validation takes time. But he was confident this technology would prove attractive to an industry struggling with finding enough truckers.

“We see the drivers as the world’s best sensors, and we are leveraging this to enable today’s drivers to be more productive through automated following platoons,” said Switkes.

Peloton’s advanced platooning system will use vehicle-to-vehicle (V2V) technology, which allows the human-driven truck to guide the steering, acceleration and braking of the follow truck. Switkes said he believes the ability to double the productivity of the driver by controlling two vehicles through the platoon will prove attractive to fleets.

He also said the highest skilled drivers will likely operate these future platoons, and could receive higher compensation for their efforts.

Peloton said this will result in “improved work for drivers through better routes, schedules, and compensation, as well as better quality of life through expanding hub-to-hub and relay-style operations that allow drivers to be home with their families every night.”

Separately, a report released on July 17 from the Competitive Enterprise Institute (CEI) found that only 20 U.S. states have thus far authorized commercial automated vehicle platooning. The first start to do so was Utah back in 2015.

CEI said “with the coming advent of automated vehicles, numerous sections of state motor vehicle codes likely will need revision if we are to take advantage of the full range of benefits offered by vehicle automation technology.”

For platooning, the legislative hurdle generally surrounds minimum following distances on the highway. The group made two recommendations for altering these regulations while maintaining safety.

CEI’s report, “Authorizing Automated Vehicle Platooning: A Guide for State Legislators” is a nationwide inventory of state “following too closely” rules that offers specific, state-by-state fixes to amend statutes in a way that exempts speed-coordinated vehicle platooning from those laws.

“The economic, safety, and environmental benefits of platooning should prompt other states to update their laws,” said Marc Scribner, CEI senior fellow and author of the report.